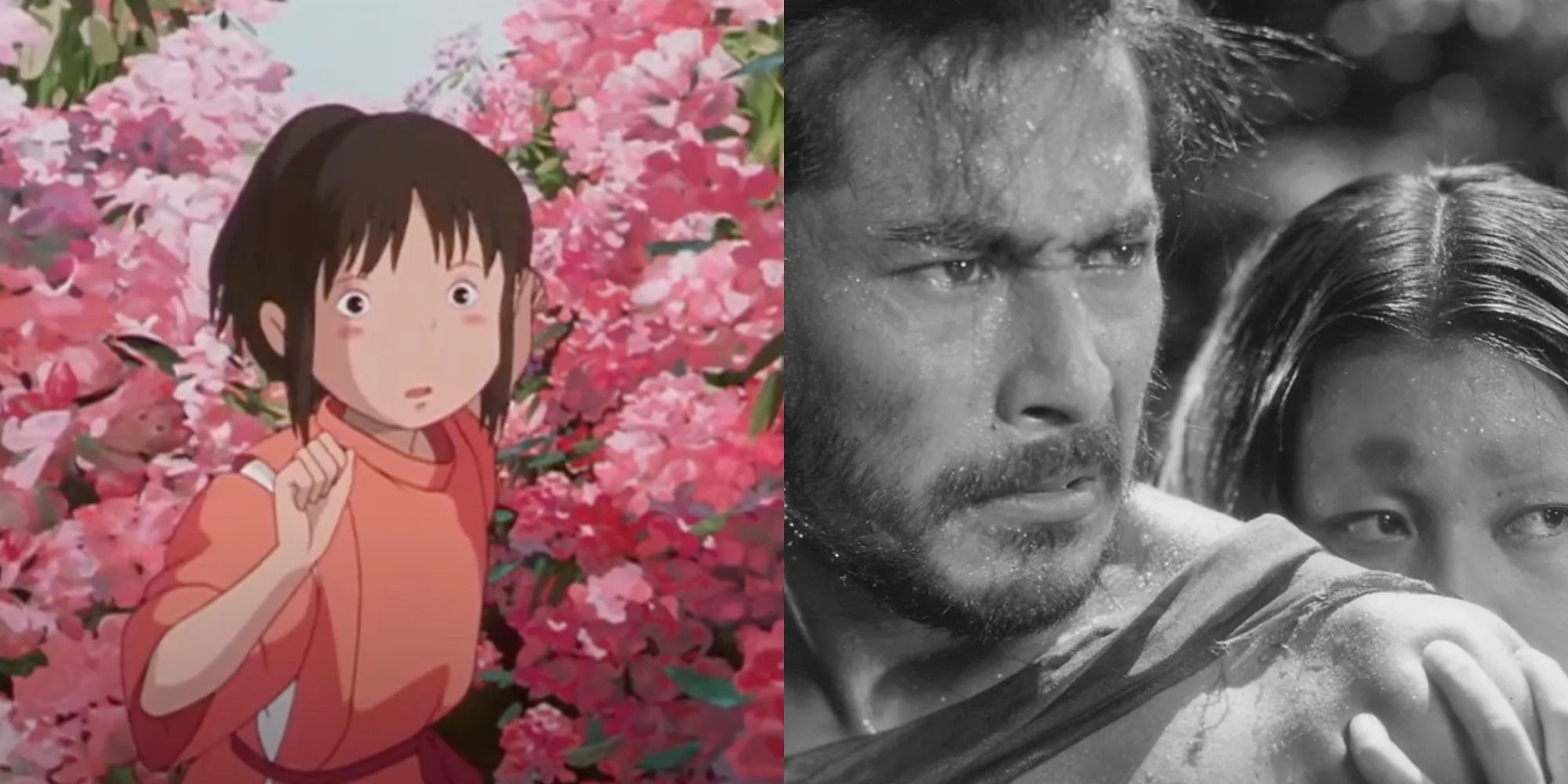 10 Japanese films nominated for the Oscars

At Ryusuke Hamaguchi’s drive my car (2021) made history as the first Japanese film nominated for Best Picture at the Oscars. The film was also nominated for three more Oscars, including Best Direction for Hamaguchi, making him the third Japanese director nominated.

RELATED: Drive My Car and 9 Other Foreign Language Films Nominated for Best Picture

However, many other Japanese films have performed well at the Oscars in the past. Some won the Oscar for Best International Feature Film, formerly known as Best Foreign Language Film, being only an honorary award before that. Others were also recognized in categories such as costume design, production design, and cinematography.

Ugetsu is a film that tackles many themes: ambition on the verge of greed, fantasy trying to dominate love, and peace shattered by a devastating war. The film follows a potter in search of riches and an aspiring samurai who disregards the safety of their wives to pursue their career aspirations.

One of Kenji Mizoguchi’s many widely celebrated films, Ugetsu surprisingly, did not receive the nomination for Best International Feature Film. It did, however, receive a nomination for Best Costume Design. The costumes and many other aspects of the film are remarkable.

Masaki Kobayashi hit his cinematic high point at the end of Japan’s golden age of cinema, but his films truly rival the greats. The human condition (1959-61) and Hara-kiri (1962) are epic, heartbreaking films that demand respect.

Kwaidan, although on a more contained scale than Kobayashi’s films of a few years earlier, is a thrilling collection of four supernatural horror stories. Since horror films rarely get much attention at the Oscars, it’s surprising that of all Kobayashi’s films, Kwaidan is the one nominated for Best International Feature Film.

Shoplifters follows a poor family who resorts to theft to get by. One evening, they bring home a neglected child to feed her. They decide to keep her and raise her as one of their own.

The film is by Hirokazu Koreeda, who is widely regarded as one of the greatest modern Japanese filmmakers. His other films include Nobody knows (2004), always walk (2008), and Like father, like son (2013). Shoplifters is, to date, his only film nominated for Best International Feature and the first time a Japanese film has been nominated in a decade.

Filmmaker Hiroshi Inagaki has directed a trilogy centered around the legendary and historic samurai, Musashi Miyamoto. Each film of the trilogy is appreciated. One of Jane Campion’s favorite films, Samurai I: Musashi Miyamoto is the first part of the trilogy and won the award for best international feature film at the 1955 Oscars.

The film follows Takezo, played by Japanese cinema icon Toshiro Mifune, as he unexpectedly finds himself on the losing side of a battle for regime change. He and his companion flee from the pursuit of the warriors on the victorious side. During the film, viewers witness the outlaw warrior escape many dangers, eventually earning the title of samurai and the new name, Musashi Miyamoto.

The 1950s are widely regarded as the golden age of Japanese cinema and it is no surprise that three Japanese films were honored at the Oscars during this decade, including hell gate. The film is also the only Japanese film to win more than one Oscar, winning both Best International Feature Film and Best Costume Design.

hell gate tells the story of a samurai who falls in love with a maid of honor. He asks for her hand in marriage only to find out that she is already married. However, he won’t take no for an answer and the strength to accept. The samurai concocts a plan to assassinate her husband, but the lady-in-waiting has her own plan.

Departures’ Winning “Best Foreign Language Film of the Year” at the 2009 Oscars was significant because a Japanese film had not won the award or any of its previous equivalents since 1955. If drive my car wins the award this year, it will replace departures as Japan’s most recent winner.

In departures, a cellist finds himself unemployed and returns to his hometown with his wife. While looking for work, he pursues what he thinks is a job at a travel agency because the description is “departure assistance”. However, he discovers that it is actually a job of preparing the dead for cremation and he is drawn to stay because of what it pays. He is embarrassed by the way he makes money and hides it from his wife, but he won’t be able to hide it forever.

Considered one of the greatest animated films of all time, Taken away as if by magic follows a 10-year-old girl named Chihiro as she falls into the fantastical and dangerous spirit world of the kami. Studio Ghibli’s Hayao Miyazaki won the Oscar for Best Animated Feature. Had the film been released more recently, it likely would have received other nominations as well.

The film, in many ways, is an exploration of Western influences on Japanese culture. Chihiro encounters kami, spirits from Japanese folklore, when she moves with her parents away from the city and into the suburbs. Taken away as if by magic also has clever allusions to capitalism, consumerism and pollution. The film is easily enjoyed as a series of metaphors or simply as an entertaining children’s story.

Prior to the release of Rashomon, its filmmaker Akira Kurosawa expected to have to give up acting due to recent career setbacks. But since Kurosawa is easily one of the most influential filmmakers of all time, inspiring directors like Sergio Leone, Francis Ford Coppola, Martin Scorsese, Steven Spielberg and countless others, cinema would be far less interesting if it had retired.. Not only did the film do well in Japan, it won the Golden Lion at the Venice Film Festival in 1951, putting Japanese cinema on the map for international audiences and critics.

This success would continue in 1952 when it became the first Japanese film to receive the Oscar for best international feature film. Rashomon is about a group of individuals on trial for the murder of a samurai. Each gives conflicting accounts of events, the first time in a film that the unreliable narrator’s storytelling device is fully utilized. The film also questions the depravity of the man, as a woodcutter and a priest relate the events of the trial to an irreverent man who takes shelter from the rain with them.

woman in the dunes is unquestionably the most beautiful work of Japanese avant-garde filmmaker Hiroshi Teshigahara. Despite his disregard for all cinematic convention, Teshigahara became the first person from Japan to receive an Academy Award nomination for directing, although many Japanese films have already received other nominations.

Adapted from a novel which, in part, resembles the Greek myth of Sisyphus, woman in the dunes tells the story of an entomologist who goes on a rural expedition to collect insects residing in the sand dunes. He runs aground and the neighboring villagers offer him to stay in a house at the bottom of a sandpit, which he accepts. A young woman lives in the house and although he only intends to stay one night, the villagers have a different scenario in mind.

Having the honor of being the Japanese film with the most Oscar nominations until it tied with drive my car, Had run also won two BAFTAs and was nominated for four more. Significantly, Kurosawa received his only Oscar nomination for directing this film.

Had run is about a warlord who abdicates his throne and divides his kingdom among his sons, resulting in betrayal and war. Strongly inspired by Shakespeare King Lear, it was the third time that Kurosawa had borrowed from the playwright. While most would consider either Rashomon (1950) or Seven Samurai (1954) his best work, Had run is certainly the filmmaker’s most epic and large-scale production.

Owen Goble is a banker by day and a writer by night. He is a voracious consumer of movies and television, often having strong opinions about them. His favorite TV show is Mad Men or Downton Abbey, and his favorite movies include Drunken Angel (1948), Tokyo Story (1953), The Tree of Life (2010) and other better known movies. He is also a huge Final Fantasy fan and his favorite musician is David Bowie.