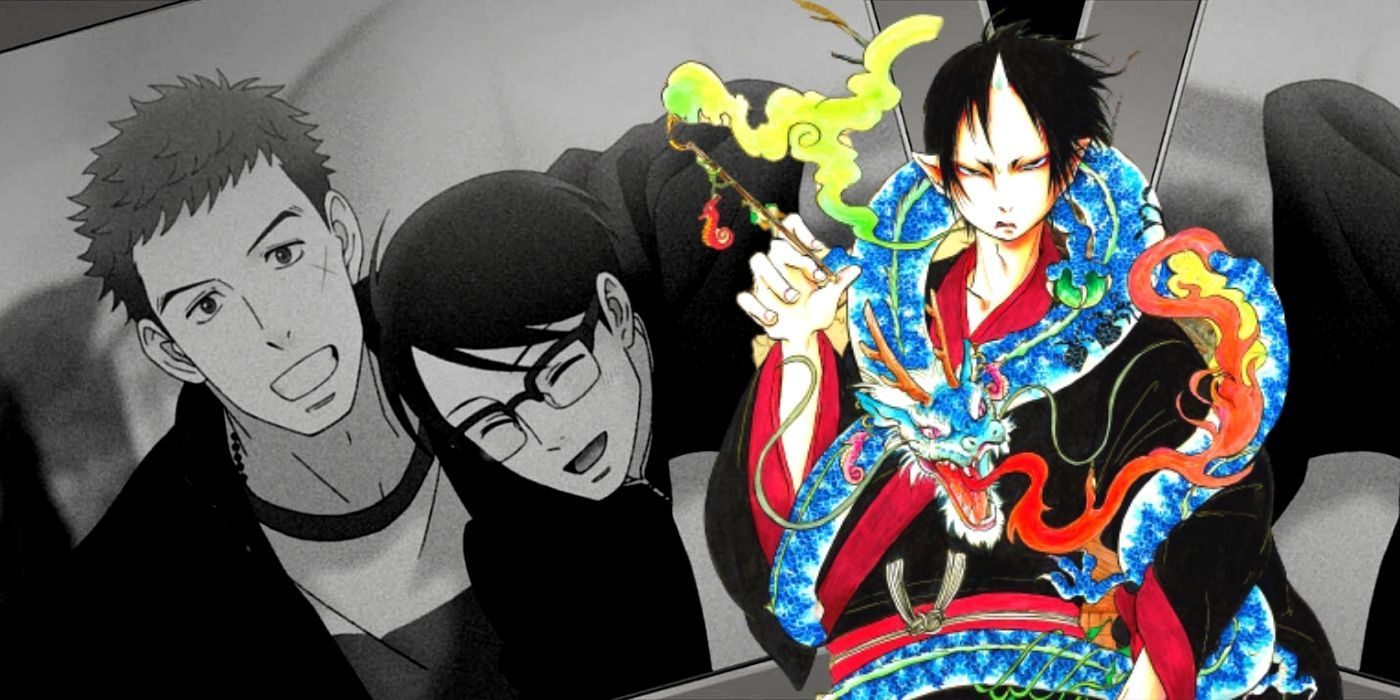 Otaku has a reputation for distilling aspects of Japanese culture into simplistic parts. Fans idealize cherry blossoms, school uniforms, and kaiju while ignoring some of Japan’s more difficult aspects. But Japan is not an anime. Its people are real and its problems are real, and many anime fans are deeply mistaken when it comes to respecting the nuances of Japanese history and culture.

Loving a country’s product is not synonymous with knowing a country. And while most anime can be enjoyed by audiences around the world, some are impossible to fully appreciate without more context. These shows are often great, and it’s worth learning a bit more history to better appreciate them.

9 Showa Rakugo captures an era unfamiliar to most westerners

While most Americans tell the past century by decade – the Roaring Twenties, the Seventies – Japanese history has been divided into several periods. The Sengoku period was torn apart by war, but the takeover by a shogun led to the military rule of the Edo period. Otaku tend to be familiar with these periods because they were the eras of warfare, samurai, and traditional folklore. But what about the Showa period?

Showa Genroku Rakugo Shinjuu is set during the reign of Emperor Showa, from 1926 to 1989. This period marked significant cultural changes in Japan, beginning with a world war and ending with a Japanese economic boom. The anime, in part, chronicles how rakugo, a form of Japanese performance poetry, has evolved and diminished throughout this period. While rakugo resurfaced in the 1950s, its prevalence declined over the decades. Much of this lauded anime is a meditation on how a changing world also changes people. Without experiencing Showa Japan first-hand, it’s hard to fully understand the nuances of this superb series.

Otaku are well versed with yokai and demons, and supernatural anime are some of the most popular of any series. Even so, some shows are deeper than others. Rather than focusing on fighting monsters, exorcizing spirits, or gaining paranormal abilities, Hozuki’s composure satirizes Japanese depictions of hell and its inhabitants as a whole.

For those unfamiliar with the curious way Buddhism, Hinduism, and Shinto intersect in Japanese storytelling, the show’s setting and characters prove difficult to embrace, and many of its references pass before the viewers. The series incorporates everything from Sumi-e illustrations and woodblock prints to traditional monsters like the tengu to the legend of Shangri-La in an offbeat comic series.

Osomatsu-santhe bizarre reboot of the classic Showa period Osomatsu-Kun series, is considered one of the best animated comedies of the last decade. Even so, it is undeniable Osomatsu-san had a stronger impact in Japan.

the original Osomatsu-Kun series aired in the 1960s and fondly remembered by generations. On a front of nostalgia, Osomatsu-Kun the closest US comparisons might be The Flintstones Where scooby-doo. The anime’s humor is both character-driven and society-driven, and Japanese daily life colors much of the comedy. Anyone who hasn’t spent too much time in a pachinko parlor, dealt with NEET life, or is unfamiliar with the bizarre, color-coded undertones of Japanese idol groups will miss much of the charm. .

In Japan, it’s not just a treat if someone buys omiyage (souvenirs) for colleagues on vacation, but an unspoken requirement. Newcomers to the workplace also offer small gifts to their peers as a welcome. The Japanese culture of giving is often transactional, as evidenced by the phenomenon of White Day: girls give chocolates on Valentine’s Day hoping that boys will return the favor a month later. Given all of this, Japanese sweets take on a cultural significance that doesn’t really have a Western equivalent.

Dagashi Kashi focuses on a family business that sells cheap candy. The anime distinguishes between cheap and premium snacks, but feels more like a candy commercial than an actual series. A show about Japanese sweets might seem bland to American audiences, but the Japanese perspective is probably quite different.

5 Who was Oda Nobunaga, anyway?

Who the hell is Oda Nobunaga? The Japanese feudal lord is rarely mentioned in Western history lessons, and it’s hard for outsiders to understand why he remains such an influential figure in Japanese culture. Essentially, Nobunaga was Japan’s first unifier, responsible for uniting the warring regions of Japan under one ruler during the Sengoku period.

Oda Nobuna’s ambition reinvents Oda as a woman, while the controversial series Koshuki depicts Oda as a teenager. In Drifters, Nobunaga and other famous Japanese warriors travel through time and space. While Japanese audiences rarely tire of Oda, his appeal is largely lost on global audiences unfamiliar with this particular historical figure.

Arguably, Bungou Stray Dogs is not difficult to understand or appreciate. But the fundamental premise of the series ensures that any viewer unfamiliar with Japanese literature is out. Each of the characters in the anime was inspired by an icon from the Japanese canon, and the real-life aspects of those authors were used to define the cast.

Anime Dazai appears to be a clumsy fool who self-harms, but the real Dazai really drowned in a canal. Akiko was inspired by an iconic feminist poet, and Ranpo is based on Japan’s greatest crime novelist. The fans no need knowing all of this to enjoy the series, but the backstory adds more layers to the storytelling.

Few Americans know there was a Russo-Japanese conflict, let alone a war. From 1904 to 1905, Russia and Japan clashed as the two nations sought power in Korea and Manchuria. Golden Kamuy, a series widely hailed for its quirky sense of humor, is set less than a decade later. The protagonist, Saichi Sugimoto, is a veteran.

Even fewer viewers know the story of the Ainu people, one of Japan’s many indigenous populations. The Ainu people rarely appear in cartoons, but lived in Hokkaido and northern Honshu for centuries before the Yamato Japanese arrived on the western side of the archipelago. The significance of an anime featuring an Ainu track is often lost on outsiders, but groundbreaking nonetheless.

2 Western influence and global conflicts underpin children on the slope

by Shinichiro Watanabe Children on the slope is about friendship and jazz in 1960s Japan and is among the best musical anime ever made, but some of its best moments have nothing to do with jazz. The show is a reflection of an era that few anime delve into and find subtle ways to capture how post-war Japan struggled to confirm a new national identity in the wake of earth-shattering violence. Abandoned by his father in a seaside town, Kaoru ends up befriending the delinquent Sen, the son of a Japanese woman and an American soldier.

RELATED: Cowboy Bebop and 9 Other Anime With Stellar Jazz Soundtracks

Western influences explored in Children on the slope are alternately liberating and constraining. The show references racism and the overwhelming power of Catholicism, but also celebrates the liberating nature of music and love.

The Yakuza are often romanticized by works of fiction in Japan and overseas, but the truth is that the Yakuza have been losing power for decades. The yakuza peaked in the 1960s and has been losing members since, as it is a crime syndicate that no longer fits modern life. Even so, the yakuza presence is still felt in modern Japan. The Japanese stigma against tattoos stems from fear of the yakuza, and anyone missing a little finger is likely to be shunned on public transport.

Hinamatsuri did something for the yakuza that few shows have: it humanized them. Rather than reveling in nightlife and violence, Hinamatsuri make yakuza members fathers and uncles, brothers and sons. Amidst a story with sci-fi elements, the characters feel like real people rather than bogeymen. In Japan, an ex-yakuza might be your neighbor rather than a video game character, after all.

NEXT: The 10 Most Historically Important Anime Of All Time

Leah Thomas is a young adult author currently living in Las Vegas, Nevada. His books have been critically acclaimed; her first book, Because You’ll Never Meet Me, was a Morris Award finalist, and her fourth novel, Wild and Crooked, was nominated for an Edgar Award. Leah was also a guest at San Diego Comic Con and, as an avid cosplayer, loves nothing more than geek culture. Find her on Instagram (@fellowhermit).