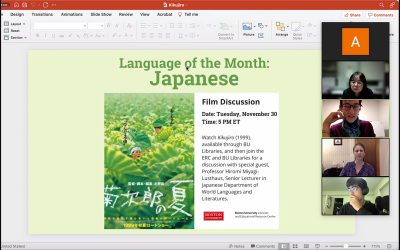 An online discussion on the Japanese film “Kikujiro” was held on November 30 to celebrate the diversity of languages â€‹â€‹at Boston University. The Language Film of the Month discussion event was hosted by the Educational Resource Center in partnership with Boston University Libraries.

â€œKikujiroâ€ debuted in 1999 and follows the story of a young boy and his unlikely guardian, Kikujiro, wandering around Japan in search of the boy’s mother.

It was directed by Takeshi Kitano, a Japanese comedian in the late 1970s who later became famous for his “very violent films,” according to the discussion moderator and lecturer in Japanese at the Department of Languages â€‹â€‹and Literatures of the world, Hiromi. Miyagi-Lusthaus.

However, the film “was really not well received. [by] Western critics, â€said Miyagi-Lusthaus,â€œ because this film was not like his other films. “

According to Miyagi-Lusthaus, Kitano wanted to create a film inspired by his father, something with a lot of â€œmelancholy and feelingâ€.

â€œThe father is an alcoholic with a habit of vagrancy,â€ she said.

Participants were invited to share their thoughts after the presentation. Discussions took place on the character Kikujiro and his personal journey. Miyagi-Lusthaus described it as a
“A terribly unreliable husband” and like “a gamer”.

Zhiyang Shu, a freshman at the College of Fine Arts, said the film had “unique” cinematography in an interview.

“They will linger on a shot for too long, even after the main action or the person on the shot is already gone,” he said.

Shu also noted how the film’s soundtrack added value to the overall plot.

â€œI felt like it was quite funny to hear what other people thought about the movie,â€ Shu said. “I don’t usually watch too many movies or talk about movies, but it was definitely a once in a lifetime experience.”

The November Film Talk is just one of many that will be hosted by the Educational Resource Center, which launched the Language of the Month initiative last year.

On December 10th, a discussion on the film “The Nightmare Before Christmas” will take place to celebrate English as the language of the month.

â€œWe really need to engage with the world, I think we have a real international community here at BU,â€ said Barbara Maratos, Literature and Language Librarian for BU Libraries who helps organize the discussions. â€œWe need to learn more about others, not only by understanding our local community, but the world at large. “