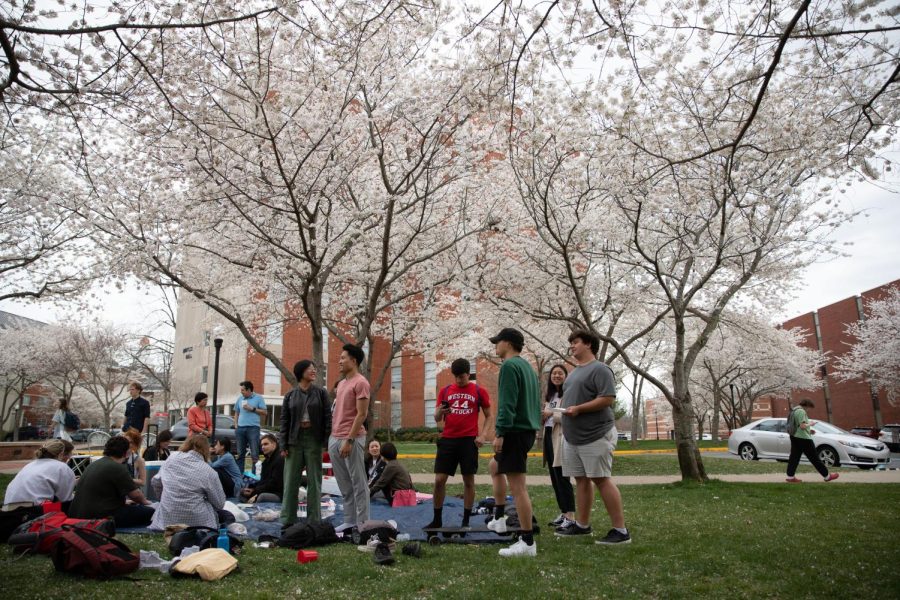 Yuki Aono was one of the volunteers who held the cherry blossom event outside DSU on March 30. “I want to encourage students to visit Japan, to teach English in Japan. Economically,” she said. “Japan is a very good country and many Japanese companies are in Bowling Green. I want [students] learn Japanese very seriously.

The WKU Japan Program held a Cherry Blossom Festival on Wednesday, March 30 under the pink flowering trees outside DSU. The event aimed to teach students about the importance of typical cherry blossoms in Japanese culture, as well as give them the chance to taste traditional Japanese cuisine prepared by four volunteers from Japan.

Cherry blossom viewings and celebrations are a common tradition in Japan. Paul Collins, Japanese teacher, explained why it is important that students in the Japanese program have the opportunity to participate in this tradition.

“In Japan, when the cherry trees are in bloom, they like to go out and enjoy the intricacies of nature,” Collins said. “The cherry blossoms here bloomed earlier this week. This allows students to see what a real cherry blossom viewing experience looks like, as well as interact with Japanese people.

Events like this allow students inside and outside language programs to experience the traditions of a different culture. Kaitlyn Morgan, a junior anthropology student, explained why these cultural events benefit students.

“It helps broaden your view of the world and also helps to understand other people,” Morgan said. “Communicating with others is so important and learning a language benefits from that; it’s also a good way to boost your resume.

Some students learn Japanese because of its commercial and economic application. There are a host of companies across the country that are based in Japan, including some in Bowling Green. Stephen Howard, a senior interdisciplinary studies student, explained this application of Japanese.

“We’re going to need people to be translators, a lot of them have come for things like video games or anime or other media, but there’s a business and a skill set that people may not know about- not be here [in Japanese]“, Howard said.

Yuki Aono is among the volunteers who helped organize the event. She is originally from Nagoya, Japan and worked as an English teacher before coming to Bowling Green. She now volunteers with the city’s refugee center and organizes various activities like this, such as judo classes and cartoon events.

“I think I can do something for Japanese learners here by organizing these events so that they can feel the real Japanese culture and traditions,” Aono said. “I want to encourage students to visit Japan, to teach English in Japan. Economically, Japan is a very good country, and many Japanese companies are in Bowling Green. I want [students] learn Japanese very seriously.

Journalist Alexandria Anderson can be reached at [email protected].