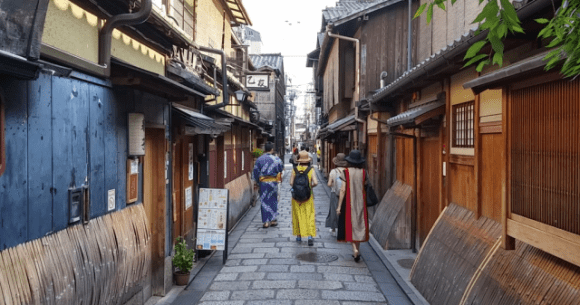 The future of the new Japan-themed resort remains uncertain.

For many visitors to Japan, a trip to Kyoto is an unforgettable experience. The historic quarters, with their beautifully preserved buildings and thoroughfares, create a traditional atmosphere so unique that you’d be hard-pressed to find anything like it anywhere else … unless you were in a city in northeast China, where they built their own “Little Kyoto”.

Known as Tang Little Kyoto, the new site, located at Dalian city, Liaoning Province, would be the largest Japanese-themed shopping complex in China. Located on a massive 630,000 square meter (6.8 million square feet) lot, construction of the facility began in 2019 and is expected to be fully completed in 2024, at a cost of approximately 6 billion yuan (929 , $ 7 million).

However, on August 21, when the the first part of the complex has been opened to the public, it immediately drew criticism from locals on the internet, which led to a temporary closure of the establishment from August 30.

â–¼ About 30 stores selling Japanese products, including Panasonic products, were open a little over a week before closing.

Popular Chinese social media platform Weibo has been inundated with complaints from people disputing the location of the facility, claiming that Dalian was an area once occupied by Japanese forces. The promotion of Japanese-made products and businesses in such an area seemed to be a sore point for many, who described the shopping complex as “an invasion of China by Japanese culture“.

According to the real estate developers behind the complex, Dalian Shuyuan Group, the municipal government ordered them to suspend operations on the night of August 30, citing concerns over criticism being voiced on the internet, as well as fears for the crowds gathering in the region during the pandemic.

â–¼ These photos from Tang Little Kyoto show the crowds that gathered there last month.

The facility is now closed to the public, with a reopening date not yet announced.. Despite the outcry online, the huge, multi-million dollar investment in the facility, which is designed to replicate Kyoto’s famous landmarks such as the Ninenzaka and Sannenzaka tracks near Kiyomizudera temple, suggests that construction of the complex will continue as planned.

The Kyoto-style cityscape of Tang Little Kyoto is currently designed by a Japanese architect, using materials imported from Japan which include traditional tiles. Private buyers have already been the purchase of some of the 1,600 buildings that will be built in the complex for hundreds of thousands of dollars, and many plan to use them as stores and vacation homes.

While a large number of locals have expressed opposition to the development, some defend it, pointing out that other cities have also used the allure of Japanese culture to attract visitors and increase tourism.

The Dalian Shuyuan group claims that the Tang Little Kyoto project is particularly attractive to the Chinese due to the fact that Kyoto, the former capital of Japan from 794 to 1868, was said to have been influenced by the Chinese architecture of the Tang Dynasty (618 to 907). They hope that this love for Kyoto, as seen in the resort, will lead to a new love and interest in Tang culture among the locals.

Sources: Nikkei Going through Jin
Selected image Â© SoraNews24
â— Do you want to know the latest articles from SoraNews24 as soon as they are published? Follow us on facebook and Twitter!

Where can I get a payday loan?