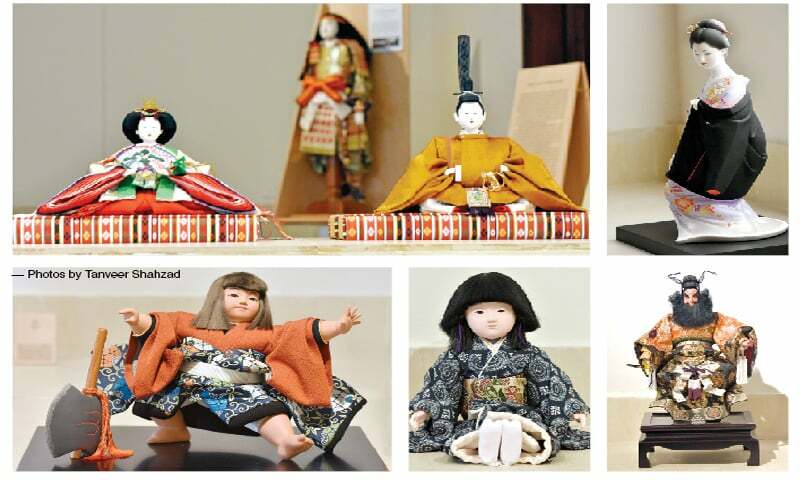 ISLAMABAD: The Japanese Embassy and the Japan Foundation held an exhibition titled Ningyo: The Art and Beauty of Japanese Dolls at the National Art Gallery on Tuesday.

The exhibition marked the start of celebrations for the 70th anniversary of the establishment of diplomatic relations between Japan and Pakistan.

It was opened by Japanese Ambassador Wada Mitsuhiro in the presence of Parliamentary Secretary for Foreign Affairs MP Andleeb Abbas and Director of Administration of Pakistan National Arts Council (PNCA) Ayub Jamali.

Speaking on the occasion, Ambassador Wada said: “It gives me the greatest pleasure to welcome you today to inaugurate this magnificent exhibition to celebrate this year the 70th anniversary of our diplomatic relations. Ningyo means dolls in Japanese and they are considered a symbol of friendship and protection and some of them are meant for celebrating young girls and boys on special occasions wishing their health, prosperity and future success .

“This exhibition reflects a very traditional and historical aspect of Japanese culture,” Ambassador Wada said, adding that there were about 70 carefully selected dolls in this exhibition divided into four sections: dolls for praying for the growth of children, dolls as fine art, dolls as folk art and the spread of doll culture.

“You can see the importance of these dolls in Japanese society; I want to thank the PNCA for providing us with this beautiful venue and for partnering with us as a co-organizer,” he added.

The first section presented the formation of the Japanese doll which originated in rituals and the form of prayers for the healthy growth of children. The second and third sections juxtaposed “Ningy as fine art” with magnificent techniques of craftsmen and “Ningy as folk art”, which are made of simple materials and various charming shapes.

Finally, in the fourth section, the evolution of Japanese doll culture leading up to the present day was revealed.

Many have a long tradition and are used for shrines, for official gifts or for celebrations of festivals such as Hinamatsuri, the doll festival, or Kodomo no Hi, children’s day.

In the exhibition, a total of 67 carefully selected dolls showed the diversity of craftsmanship.

The collection, which is available to the public until January 25, was a profound cultural symbol reflecting the rich history of Japanese dolls and how they intertwine with the Japanese way of life.

The exhibition featured a comprehensive introduction to Japanese doll culture, from Katashiro and Amagatsu, which are considered the archetypes of dolls in Japan, to local dolls that reflect the climate and anecdotes of the whole country, to dress up dolls who are loved. in Japan today in the form of toys and scale figures that are popular around the world.

As with most handicrafts, the meticulous craftsmanship of Japanese artisans was evident in the fine stitching, attention to detail, and selection of materials and patterns.