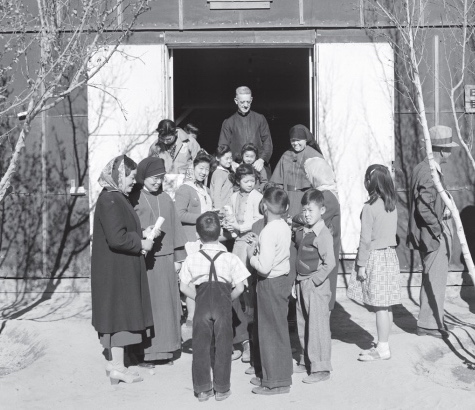 This Sunday April 4 is Easter Sunday. While Easter celebrations in Little Tokyo don’t have the same significance as community festivities like Nisei Week, the celebration of Christian holidays (and even St. Patrick’s Day) at the Japanese Catholic Center in St. Francis Xavier Chapel. in Little Tokyo is a tradition that has been going on every year for decades.

Although the number of Catholics among Japanese Americans has always been low – according to government estimates, they made up only 2% of the total population of Japanese Americans on the West Coast in 1940 – the church Maryknoll of Little Tokyo and her clergy played a distinct role in shaping the Los Angeles community during this time.

That year Leo Kumataro Hatakeyama, a Russian-Japanese War veteran, wrote to Bishop Alexander Berlioz of Hakodate to confess his sins because, he explained, none of the priests in Los Angeles spoke Japanese. Bishop Berlioz told Hatakeyama that he was not allowed to go to confession by mail, then decided to send one of his priests, Father Albert Breton, to Los Angeles to work with the Japanese community there. -low.

Although the origins of Maryknoll’s presence in Los Angeles date back to 1920, when the Vatican authorized them to take control of the Japanese-American mission in Little Tokyo, their real importance to the community dates from the arrival of Father Hugh Lavery. in 1927. In the years before the United States entered World War II, Lavery led the expansion of the Maryknoll School, overseeing the construction of an additional floor and the implementation of a school bus for the students of Nisei.

In 1924, Father Lavery organized the creation of one of the first Japanese-American scout troops, troop 145. The troop was led by Brother Theophane Walsh, who also drove the school bus (an advantage that allowed many students, like Joyce Okazaki, attend school). Although the Maryknoll School offers a regular American curriculum, its principals also encouraged learning Japanese among the Nisei and even hired teachers from Issei to provide Japanese lessons to students.

After the attack on Pearl Harbor on December 7, 1941, the Maryknoll Mission remained one of the few community centers in Little Tokyo that had not been closed by authorities. Between December 1941 and March 1942, the Maryknoll Auditorium became a regular meeting place for activists from Nisei, such as Rafu Shimpo English publisher Togo Tanaka, to discuss the future of Nisei.

The Rafu Shimpo reported on numerous meetings held at the Maryknoll Auditorium, including a legendary meeting of the United Citizens Federation, chaired by Tanaka, held on February 19, 1942, the day Decree 9066 was issued, and where various speakers campaigned against the forced withdrawal.

During this time, the priests of Maryknoll were working overtime to help the Japanese American community. In February 1942, Father Lavery visited the Fort Missoula internment camp in Montana to testify on behalf of the Issei leaders detained there. Following the expulsion of Japanese Americans from Terminal Island, Maryknoll Church provided space for uprooted families.

Father Lavery and Brother Théophane helped form a speaker bureau to mobilize public opinion behind Japanese Americans. Perhaps the most bitter moment came when Father Lavery questioned WCCA (Wartime Civilian Control Administration) Director Col. Karl Bendetsen about orphans of partial Japanese descent. Bendetsen replied that if anyone “has a drop of Japanese blood in them, they all have to go to camp.”

After Western Defense Command mass incarcerated Japanese Americans, the Maryknoll siblings helped organize the families and then joined them in the camp.

By May 1942, all of the Maryknoll clergy had left Los Angeles and the Maryknoll School closed. Throughout the period of incarceration, the priests and nuns of Maryknoll worked in the ten concentration camps of the War Relocation Authority as spiritual leaders and teachers. Father Lavery wrote letters of support on behalf of Issei being held by the FBI in internment camps and traveled between the Manzanar and Tule Lake camps to celebrate mass.

One of Lavery’s sermons was presented by Carl Myden in March 1944 as part of his Life magazine report on conditions inside Tule Lake Concentration Camp. Maryknoll Sister Bernadette of Los Angeles maintained a school in Manzanar, and Brother Theophane organized a youth hostel in Chicago for Japanese Americans of all faiths leaving the camp.

After the exclusion ended in January 1945, Father Lavery and the Maryknoll clergy returned to Los Angeles with American-Japanese families, and the Maryknoll school reopened. Maryknoll also rebooted centuries-old traditions such as the school marching band and the Boy Scouts. In 1957, Father Lavery left Maryknoll Church for New Orleans, marking the end of his 30-year tenure in Los Angeles. In 1966, the Japanese government awarded the Order of the Sacred Treasure to Father Lavery for his tireless efforts to support the Japanese American community,

In the mid-1960s, Maryknoll’s original school building was demolished and a new building was constructed. During the 1970s and 1980s, as Japanese Americans moved from Los Angeles to the suburbs, the Maryknoll School experienced a slow decline in enrollment.

The Maryknoll priests are now absent from Little Tokyo. Nonetheless, many Nisei and Sansei Maryknollers today bear witness to Maryknoll’s legacy and influence on Little Tokyo.

For Sansei Patty Arra, the Maryknoll School was one of the last vestiges of the original Japanese-American community: “The Maryknoll School was one of a kind with 99% of the students being Japanese-American or Japanese. We celebrated our Japanese culture and Catholic faith within our community back then and still do today with opportunities at the Japanese Catholic Center in St. Francis Xavier Chapel. If you are a Japanese American / Japanese Catholic from Los Angeles, surely you must know Maryknoll.

Author’s Note: Special thanks to Patty Arra for her help with this article.

Jonathan van Harmelen holds a doctorate. studying history at UC Santa Cruz. A specialist in the history of Americans of Japanese origin, in particular their relations with the Catholic Church, he is a regular columnist for Discover Nikkei. He can be contacted at [email protected]