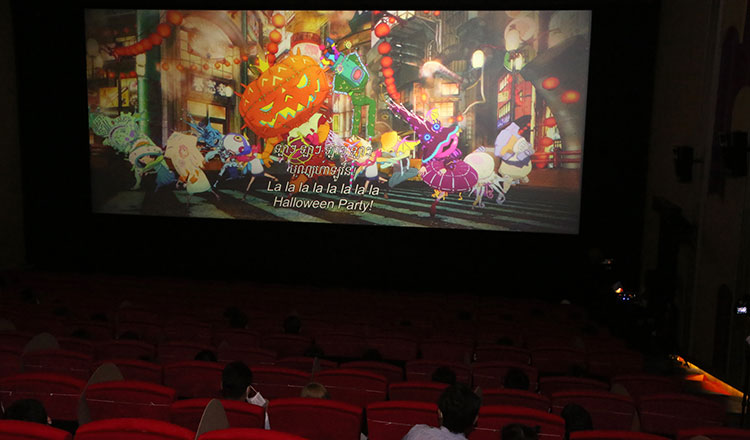 After cancellations when cinemas closed last year due to the Covid-19 outbreak, the Japanese Film Festival is back on screen from January 14-16 and 22-23 to promote and connect Japanese and Cambodian cultures more closely.

The opening of the 2022 festival took place on Friday and was presided over by Culture Minister Phoeurng Sackona and Japanese Ambassador Mikami Masahiro at Phnom Penh’s Major Cineplex in Aeon 2 Sen Sok Mall.

Khmer time joined the event to watch the film shown for the guests at the opening which was the animated film, “Poupelle de Chimney Town”.

It was about a chimney sweep and a friendly monster named Poupelle who set out to prove that the stars are real. An industrial city is blanketed in chimney smoke and since the townspeople haven’t seen the sky in centuries, they no longer believe stars exist.

The content of the film made the audience keep believing, keep watching, and have faith in themselves. Even in the very darkness, keep looking for the light and you will find a little light to guide you out of the darkness.

Ambassador Mikami said he was really happy to attend the opening of the festival this year and expressed his gratitude to the Ministry of Culture and the Japan Foundation Asia Center for putting so much effort into organizing the festival. in such a short time due to Covid-19 limitations. .

“Besides watching movies, I hope Cambodians will experience Japanese society and culture through a variety of movies and get interested in Japan,” he said.

It was his first time watching “Poupelle de Chimney Town,” the ambassador said, adding that he is very popular in Japan because he uses the same animation taken from the comic book for the film.

Sackona said the ministry sees the Japanese Film Festival as a way to help promote and strengthen closer bilateral relations between Cambodia and Japan, especially in the area of ​​arts and culture.

“This event is not only a forum for promoting Japanese films but also a meeting place for Cambodian and Japanese filmmakers and technicians to share experiences in order to discover our strengths and weaknesses in the fields of human resources and technology. to create more new investment opportunities,” she said.

Japan Foundation Asia Center Director Isogya Hiroyuki said the Japanese Film Festival in Cambodia is celebrating its 7th anniversary this year. Some may remember that the last edition of the festival was interrupted halfway due to the pandemic.

“Covid-19 has had a severe impact on the film industry, as well as various aspects of society. In Cambodia, cinemas have been closed for months. However, thanks to the strong leadership of the Cambodian government, vaccination has progressed rapidly and other appropriate measures were taken, and now Cambodian cinemas are regaining their vitality,” he said.

“I am very happy to be able to hold this annual Japanese film festival again amidst this momentum. This year, we have selected ten films in a wide variety of genres, such as animation, comedy, mystery, love story, science fiction, etc.,” he added.

He said the opening film, “Poupelle of Chimney Town”, which won and was nominated for awards at various international film festivals, is filled with inspiring performances and splendid music and sound effects that bring laughs. , tears and joy.

Payday loan victims only have days to get the last payment