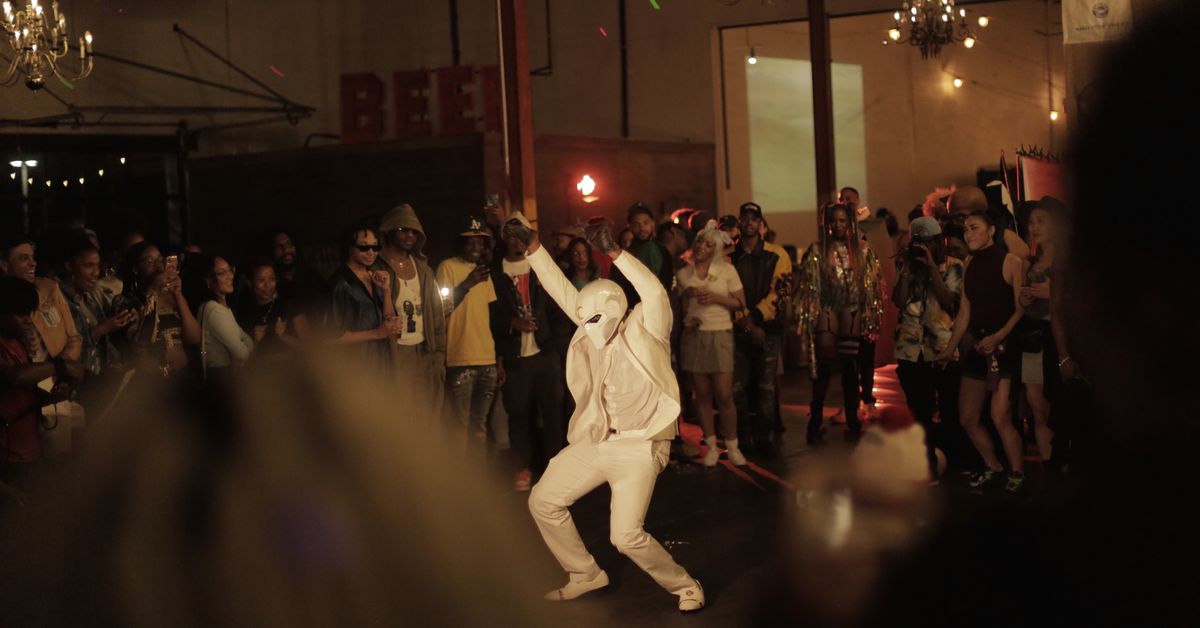 DJs and dancing, made-to-order sushi, cosplay contests and anime projected onto the walls. Stepping into a Trap Sushi pop-up party means not only experiencing Atlanta, but also a bit of Japanese culture.

Musical artist Tolden Williams, known by his stage name Troop Brand, and his wife Stephanie Lindo hold the bi-monthly event at Monday Night Garage in the West End to celebrate the interests and cultures they love. Through Trap Sushi, the pair want to welcome anime enthusiasts, expose more people to facets of Japanese culture and cuisine, and throw a good party celebrating Atlanta in the process.

Anime has been a part of Brand’s life since childhood. A native of Mississippi, he remembers walking into a store as a teenager and catching the Shounen jump the manga magazine and the Akira film.

“I think those two were my introduction to anime and manga,” says Brand. He noticed the food in the comics – sushi, dango, ramen, takoyaki – and found himself wanting to try more. It wasn’t until he moved to Atlanta around 2014 that he really started to dive deeper into Japanese cuisine. That, and a trip to Japan with his father when he was 15, gave him an appreciation for the country’s culture.

“Being [in Japan] and just experiencing the culture, that was so great because I was already into the culture – like I love sushi, I love cooking,” Brand says. “These influences kind of gave birth to the idea of ​​Trap Sushi, to bridge the gap between these two cultures [Atlanta and Japan].”

Brand has been plugged into Atlanta’s hip-hop, sushi, and anime scenes for a while now, but noticed there wasn’t one place or experience where all of his interests intersected. Most anime conventions only happen once a year – and too expensive for many people to attend. They can range from $40 to $100 per ticket. These events are “safe spaces” for the anime community, says Brand, but he wanted that to be true beyond the annual conventions as well.

In January 2020, Brand partnered with Erinn Knight to launch Trap Sushi at Our Bar ATL on Edgewood Avenue. Now he and Lindo plan regular events at Monday Night Garage, while Knight focuses on promoting Trap Sushi to hold events in other cities. Depending on the ticket — general admission, early bird, or VIP — a Trap Sushi pop-up costs between $15 and $30 per person, which takes you to a decorated party.

“Not everyone is able to take a trip to Japan, or not everyone even knows where to go to try some of these snacks, or not everyone may be aware of sushi or the culture “, says Brand. “So we just try to mix the cultures [from Atlanta and Japan] as much as possible to give people the opportunity to see and experience it.

Besides sushi, other local pop-ups like Phew’s Pies and The Real Mexican Vittles serve their food while Monday Night serves drinks. The event also showcases Atlanta music and entrepreneurial retail businesses. Trap Sushi brings in resident DJ, DJ Lachii and other local music talent and invites Atlanta vendors like Overall Designs, Grillz by Scotty and Kimono Gang, who park “Tokyo Drift-style cars” wrapped in anime characters (aka itasha) in Monday Night’s back chandelier room near the DJ and dance area.

Although costumes are not mandatory, there is always a catwalk-style cosplay contest. The DJ plays a track for each contestant as they compete for either the judge’s pick or the crowd’s favorite track, both of which come with prizes. The overall cosplay contest winner receives $100, and the crowd favorite winner receives a mystery bag, which in the past included anime posters, Japanese candy, anime car decals, and Moreover. Then there’s lots of dancing and other entertainment, like photo zones and board games.

“Trap Sushi was really for people like us who love [anime] culture… who love the food, who love Atlanta,” Lindo says. “But it’s also for people in Atlanta who may not know much but really like to have a good time.”

Growing up watching cartoons, Monday Night Hospitality Manager Anthony Drago was personally enthusiastic about Brand and Lindo approached him to host Trap Sushi at the brewery. But he also supported Monday Night’s mission to invest in the West End community.

“He supports local Atlanta artists, and all the vendors they have are all West Enders as well,” Drago explains. “So yeah, let’s support our community and do something we love and resonate with.”

Laree Starke, CEO of Beltline Cosplay, first attended Trap Sushi after Brand and Lindo invited her to judge the cosplay contest at the November 2021 event. Since then, she and members of the cosplay organization showed up at every event. She came dressed as Pennywise the clown from ThisPrincess Morbucks of The Powerpuff Girlsand Dominos from dead Pool.

“It’s just a vibe,” Starke said. It’s interactive and energetic. The music is great and everyone is dressed. Additionally, Trap Sushi creates a welcoming space for people of color, something that can be hard to find at some cosplay conventions. “It’s a comfort that I appreciate and something that I can relate to much more easily” than an environment that doesn’t feel as receptive to people of color, she adds.

What started with just a few hundred attendees welcomed around 800 people at its last brewery party. With several events under their belt, Brand and Lindo are looking to the future and expanding the Trap Sushi experience. Some big names have already noticed the pop-up too. In February, Trap Sushi collaborated with BoB and his brand Send Noodz for a ramen event. Occasionally, the Atlanta rapper stops by one of the parties.

Brand also hopes to eventually turn Trap Sushi into an Atlanta-Japanese music and food festival, but knows it has to scale slowly, keeping in mind the community the pop-up is already creating.

“That’s the end goal: taking those steps to get there, but also making sure we don’t grow too fast to the point of losing our community,” he says.


Register to receive the newsletter