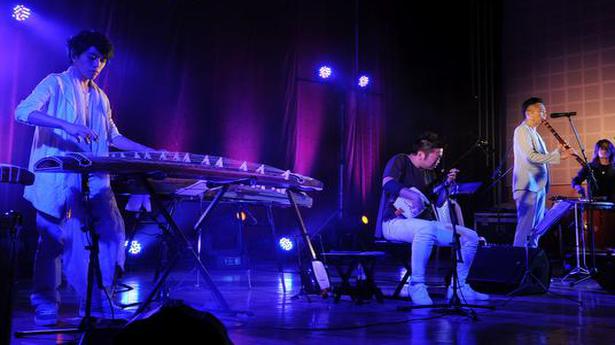 The saying that music is the voice of the soul and transcends man-made boundaries was elucidated by the performance of WASABI, a traditional Japanese instrumental group at Fatima College last week. The music concert was organized by the Consulate General of Japan in Chennai in collaboration with the Japan Foundation.

Vimala Solomon, principal of Surya Nihongo Gakko, a Japanese language school in Madurai, introduced the group to the city as an expression of goodwill between India and Japan. Speaking on the occasion, she said, intercultural events help to strengthen ties between nations

WASABI is composed of the Ryoichiro Yoshida quartet, which plays the Shamisen, a Japanese three-string instrument similar to the Indian sitar), Hiromu Motonaga on Shakuhachi, Japanese bamboo flute), Naosaburo Biho on Taiko, the Japanese drum) and Shin Ichikawa tackling the Koto, a Japanese 17-string harp. They aim to introduce traditional Japanese music to young people around the world.

As the event was a first of its kind here, the Maduraites were a little skeptical and didn’t know what to expect. When the lights went out, an anticipated lull hit the audience. The concert started with the rhythms of the macho sound Taiko and was soon followed by energetic and energetic notes of the Shamisen. Before you get used to it all, the melodious Shakuhachi hypnotized the audience and that’s when Kotoannounced himself, carefully balancing the magical effect. Although the four instruments are different and unique in their own way, they came together to create an engaging medley that delighted audiences.

Motonaga presented the various instruments played by WASABI and explained their rich historical and cultural background in Japanese traditions and folk tales. While retaining the authentic traditional Japanese instruments, the group also tries to make their music more energetic and inspiring for young people, he said.

The concert featured original compositions by the group that reflected the spirit of Japan. Even though it was an instrumental concert, the music of WASABI was expressed in a language you do not yet know as if you understood it. Their Sakura sakura the composition in particular gave the impression of being surrounded by the pink cherry blossoms of Japan whispering the secrets of ancient folk tales.

WASABI captivated Maduraites with their quirky and eclectic music. They made the concert as lively and interactive as possible. Yoshida’s energetic performance supported by Motonaga and Ichikawa’s elegant style and Biho’s attempt to interact with the audience in Tamil, making them clap to the beat of his drum beats, helped maintain an electric atmosphere throughout. long. The feel of the music changed from moment to moment, varying between relaxing, playful, energetic, inspiring and humiliating sensations.

The audience was made up of many foreigners as well as professors and students from Fatima College. Dr. Sr. G. Celine Sahaya Mary, Principal of Fatima College honored the occasion and congratulated the musicians after the performance. Organizers of the event staff believe that in recent times more and more students are interested in learning foreign languages, as it improves their resumes and broadens their employment opportunities. Without a doubt, events like this will inspire students to learn more about the culture, tradition and way of life of other countries around the world.